Well, we may have skipped our current series of reviews, but we had to look at the best comic book event of the year: the crossover of Supergirl and The Flash.  Well, at least where Flash guest stars on Supergirl.  Anyways, we are expecting fun stuff; let’s hope we get it.  This is our review of the 18th episode of Supergirl, called Worlds Finest.

Let’s start with a promo that half of which doesn’t matter to this episode.

We’ve never had to deal with IKEA, but since it has internet fame.

Don’t be an alienphobe Winn.

♫♫I hear voices in my head, they call to me, they understand, they talk to me♫♫

Migraines are a bitch…but so is she.

Melina was a better screamer

Wow, that was convenient.

Poor Barry, if you hadn’t been thinking and weren’t a nice guy…

Why are you listing Zoom with the heroes?

Must you tell everyone your secret identity Barry?

Mariah Carey?  My condolences.  We too.

Hard to believe aliens are that cute huh?

Well, not all of them were evil.

I hope Barry paid for those. 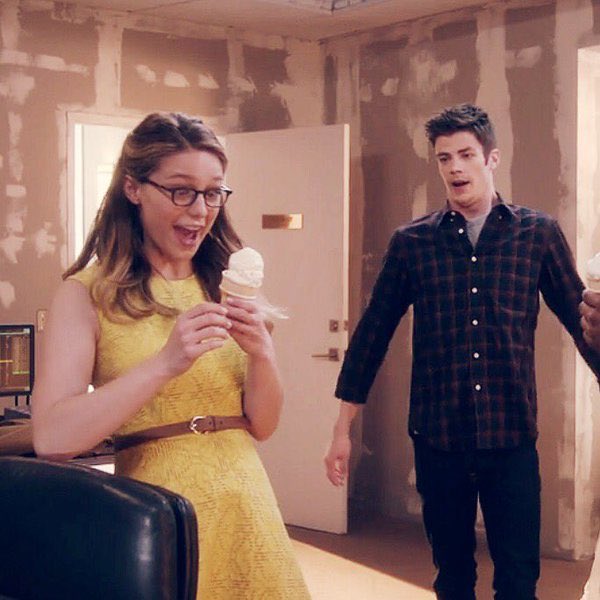 Yes, that look is there.

You’d think all her employees would be vengeful.

Cat’s not buying it.

You should have tried “Scarlet Speedster” with Cat, Barry.

You survived your first encounter with Cat, Barry.  After that, the two bad girls should be a cinch.

I’ve known many families with all their women like that.

Why didn’t she do more of this long distance screaming later in the show.  Oops, sorry for the spoiler.

You had more than a little help Cat.

Flash, do you really need a spaceship

Is there any other kind of Taylor Swift squad?

You’re not fooling anyone Olsen.

Always stand behind a pretty girl…the view is nice.

She loves that dress, and we love her wearing it.

Thankfully, he wasn’t as well know when he went bad.

It’s surprising none have teamed up against Cat before.

Sparky?  Shrieky?  Cisco would be ashamed of you dude.

Can’t blame you being a helicopterphobe girl.

That was short.  Or a short.

Barry taught them that?

Mormon?  Well, he would be allowed to have Iris, Kara, Felicity, and Patti all at once.

Should you really be the one giving relationship advice Barry?

Hell of a kiss.

It left him speechless.  That’s usually a good sign.

There is no doubt that Kara and Barry, and the actors portraying them, have chemistry.  Someone once said that Fitzsimmons of Agents of Shield were refugees from the twitter account Cute Emergency, but not near as much as these two.  Hopefully we see more of it.

I hope we keep it that Cat realizes that Kara is Supergirl once and for all.  After all, the only reason she stopped believing it was because she saw two Karas at once, and now that it’s been reveal that Kara knows a shapeshifter, that excuse is out.  Cat should just pretend she doesn’t know Kara’s secret, as Cat could definitely use the bodyguards.

Honestly, we’d been happy to just have 60 minutes of Kara and Barry goofing around together.  The first 40 minutes was awesome.  The last 20 minutes were OK, but seemed a bit rushed.  Also, it seemed forced that Kara is once again beloved in National City (wow, never really realized what a horrible name for a place that is), but like some wrestling stories, you’re overlook a lot of nonsense if it gets you where you want to be.

Honestly, we wish they had just stopped the episode with Barry leaving.  Having to prepare for the next episode was kind of a let down.  It’s like have a great dinner, but you picked up a bad after-dinner mint as you leave the front door.

All in all, if you just ignore the last bit, this is a 5 snowflake out of 5 show.  We wouldn’t mind a TV show called “Worlds Finest” where we see Kara and Barry together every week.