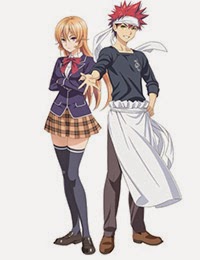 Always on the lookout for anime we’ve never seen before, we managed to find the anime Food Wars on our On Demand options of our DVR.  Curious, we went and checked it out.  Here is our review of the first episode, entitled An Endless Wasteland.

The episode can be found on Crunchyroll at: http://www.crunchyroll.com/food-wars-shokugeki-no-soma/episode-1-an-endless-wasteland-678161.  Since the review was done off a DVR, we do not have minute/second positions.

Squid tentacles and peanut butter?  In the words of my most trusted confidante: BLAH!

There’s no way fried rice can be that good.

Why would you do that to strawberries???

Not a bad intro

Try to hide your crime, girl.

Must be one heck of a culinary school.

CLOSING ODE  (why the near nudity?)

Intimidating, but a nice rack.

Having seen the next three episodes before writing the commentary, we must say that this is more of a prequel than a pilot or first episode.  If you watched most of this episode, you’d think it would be about a dude having to handle working with his father at a family diner, and instead it’s about a dude from a lower-class background having to fight the snobs at an elite institution of learning, althro one that focuses on cooking.  He’s an awesome and creative chef, but he will also make oddball dishes that have little chance of being well thought of.  Also, this is the most ecchi of the four episodes watched so far…the rest are much further from being wannabe hentais.

As for this episode, it started a bit slow, but a likable protagonist always helps, and it helps that he is obviously a master of his craft.  You could almost skip this episode and just watch the rest of the series, but you might as well start here.

After all is said and done, while this series has a strong chance of being a 5 out of 5, due to starting slowly and having little to do with the rest of the series, we’re giving it 4 snowflakes out of 5.