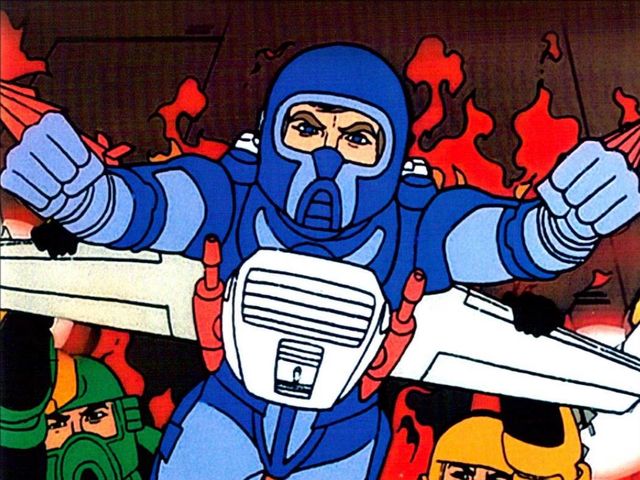 While we like doing anime reviews, we at Icygeek do want to highlight classic action cartoons from the 1980s.  From now on we will try to do this every Friday.  Today we are looking at the first episode of The Centurions, a series that lasted one year with an amazing 65 episodes.  There was an accompanying toyline as well.  How is the cartoon?  Peruse our potshots and then read out summary below.

The episode can be found online at http://www.toonova.com/centurions-episode-1.

8:15  Been awhile since I heard about that belt.

13:34  That’s why you should already have your helmet on.

20:34  Your little science lesson to make this educational

Watching this episode really gives you an idea why the toyline failed.

Maybe that is a bit unfair.  The toys, at least for the heroes, were quite nice.  You didn’t get to see each hero’s biggest set of weapons, but you got to see their basic weapons (the ones the figures came with) and their smaller upgrades.  The figures were roughly the height of a Barbie doll, so if Barbie wanted a more manly alternative to Ken and if you had a sister, that dating was possible.  We should note that we had most of the toys, but they were almost all bought at clearance, starting at New Year’s Day after the first Christmas the toys were available.

But here are the faults.  The voice acting is sub par.  The heroes are stereotypical, but workable, but sheesh do the villains suck.  Hacker looks like a goof and Doctor Terror is a bit cheesy even for the 1980s.  There is also some very bad science that even back in the day wouldn’t cut muster.  After all, you pretty much have Captain Cold’s weapon of choice cool down the whole planet.  If the planet was already over 150 degrees, than the planet is pretty much already kaput.

(I should note that the villains toys weren’t that good.  The  idea was that each was a cyborg or robot and that the two cyborgs could merge into a robot, but that never looked good or believable, even in that foregone error.)

There is no way we intend to review too many more Centurion episodes.  Do we recommend it.  Eh, you could do worse.  The educational lessons at the end of each episode aren’t bad, and the show did have its moments.  But the reasons why it failed are obvious: the cartoon couldn’t carry the weight for a toyline that was too pricey for the day, and had bad villains.

This episode gets a mediocre and generous 3 snowflakes out of 5, mostly for nostalgia.